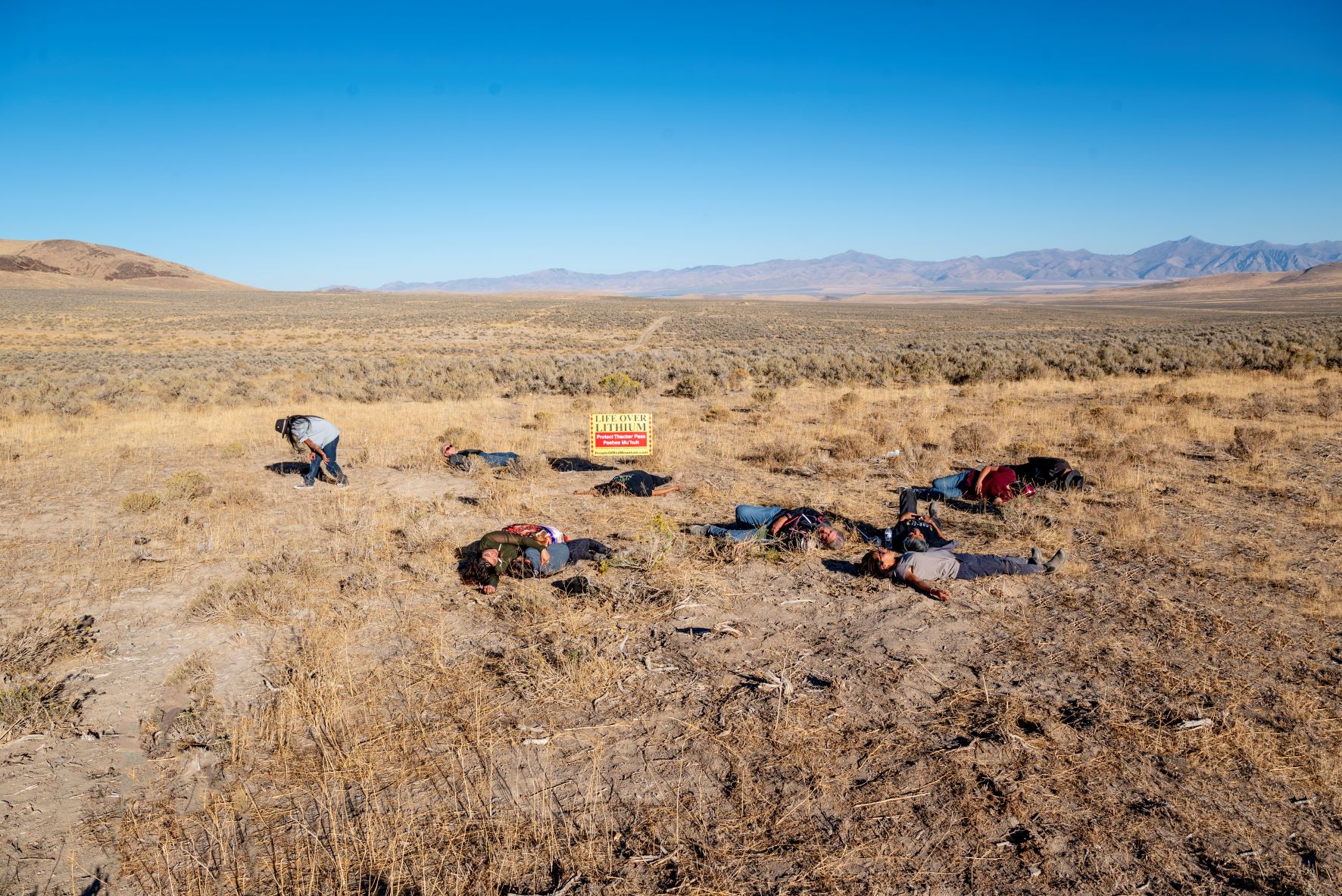 (RENO, NV) – The Thacker Pass Lithium Mine in northern Nevada is headed back to Federal Court on January 5th as the lawsuits against the project near completion, but project opponents are raising the alarm that Lithium Nevada Corporation has already begun work on the proposed mine.

Lithium Nevada’s workers at Thacker Pass have begun digging test pits, bore holes, dumping gravel, building fencing, and installing security cameras where Native Americans often conduct ceremonies. Lithium Nevada also conducted “bulk sampling” earlier this year, and may be planning to dig dozens of new test pits across Thacker Pass. They are claiming this work is legal under previous permits issued over a decade ago. But Tribes and mine opponents, including the Reno-Sparks Indian Colony and Summit Lake Paiute Tribe, disagree.

They point to language in the Final Environmental Impact Statement for the Thacker Pass Lithium Mine that says, “Authorization of [the mine] will terminate the [earlier permits].” The Federal permit for Thacker Pass was approved on January 15th, 2021.

Will Falk, attorney for the Reno-Sparks Indian Colony explains: “Lithium Nevada told the government and the American public that it would terminate the older permits upon BLM’s approval of the Thacker Pass Project. Now they are going back on their word, it appears they are lying to get a head start on building the Thacker Pass mine, and the BLM is allowing them to get away with it.”

Thacker Pass, known as Peehee Mu’huh in Paiute, is a sacred site to regional tribes whose ancestors lived in the area for thousands of years, and were massacred there on at least two occasions.

Michon Eben, Tribal Historic Preservation Officer at Reno-Sparks Indian Colony, says the site is incredibly important to Native American history. “Peehee Mu’huh is a sacred place where our ancestors lived and died. We still go there to pray, gather food and medicine, hunt, and teach our youth about the history of our people.” Eben and the Reno-Sparks Indian Colony are currently hosting an exhibit on the impacts of mining on Native people of Nevada.

Tribal members have stated in court filings that, because of the history of battles and massacres on the site, Thacker Pass is as significant to their culture as a site like Pearl Harbor is to American history. Arlan Melendez, Chairman of the Reno-Sparks Indian Colony, understands the importance of battle and massacre sites as both a Native American and as a U.S. Marine Corps veteran.

“As tribal leaders, it’s our responsibility to protect and honor our sacred places,” says Melendez. “Throughout US history, tribes have always been set up to lose in the US legal system against BLM. This Lithium Mine stands in the way of our roots and it’s violating the religious freedoms of our elders, our people.”

“The Reno-Sparks Indian Colony and Summit Lake Paiute Tribe are still engaged in consultation with the BLM about the September 12, 1865 massacre site, a site that will be completely destroyed by Lithium Nevada’s mine if this project is built,” Falk says. “It’s hard to believe a government agency is consulting in good faith when they are already allowing the site to be harmed.”

Shelley Harjo, a tribal member from the Fort McDermitt Shoshone Paiute Tribe and an employee of the Reno-Sparks Indian Colony, has called the planned destruction of Thacker Pass “the biggest desecration and rape of a known Native American massacre site in our area.”

The upcoming January 5th hearing in Reno’s Federal Courthouse will be the final oral argument in the ongoing lawsuits against the Thacker Pass mine. Mine opponents are planning a march and rally outside. Plaintiffs, including the Reno-Sparks Indian Colony, Burns Paiute Tribe, four environmental organizations, and local rancher Edward Bartell, have alleged numerous violations of the law, and Judge Miranda Du is expected to issue her opinion in the case within days or weeks of the January 5th hearing.

“No matter what happens in court on January 5th, Thacker Pass is being destroyed right now and that threat will be ongoing,” says Max Wilbert, co-founder of Protect Thacker Pass. “We have to stop that.”

Lithium Nevada claims that its lithium mine will be essential to producing batteries for combating global warming, and the Biden administration has previously indicated some support for Thacker Pass. Opponents of the project have called this “greenwashing,” arguing that the project would harm important wildlife habitat and create significant pollution. They say that electric cars are still harmful to the planet.

About the Reno-Sparks Indian Colony

The Reno-Sparks Indian Colony formed a federally recognized government in 1936 under the Indian Reorganization Act.  Located in Reno, Nev., the RSIC consists of 1,206 members from three Great Basin Tribes – the Paiute, Shoshone and Washoe Tribes. The RSIC is a vibrant, diverse organization, which balances traditional teachings and rich culture with contemporary business methods. Our mission is to offer opportunities for tribal members to improve their lives and enhance tribal values by making community programs, services, and projects available, while educating the public about our history, culture and modern lifestyle.